While IPR gets a lot of attention, the strategic value of reissue should not be overlooked. Reissue is a post-grant proceeding that may be a useful way to amend a patent facing IPR. Although claim amendments are allowed during the IPR proceeding, the types of amendments that can be made are currently limited, and patent owners must make their case for amendment under tight deadlines and page limits. As such, only in a handful of IPR trials have claim-saving amendments been allowed.

If reissue can occur quickly—particularly when a competitor is in the market and time for getting enforceable patent rights is tight—it can be a way to avoid the issues with amendment that accompany IPRs. But historically, the reissue process has not been quick, significantly diminishing its value. So when a client came to us several months ago and asked about current reissue pendency times, we did some digging online. Not finding that anyone had crunched the data recently, we did it ourselves, and discovered that the typical pendency times for reissue have fallen dramatically. 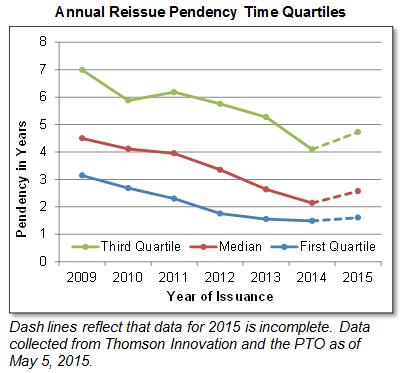 As a result, we thought it was time to take a fresh look at reissue as a viable option. To read more of our analysis, including strategic considerations and lessons learned from this data, check out our recent article in Bloomberg BNA’s Patent, Trademark & Copyright Journal. For a primer on reissue and how it compares to other post-grant options, download our Post-Grant Proceedings Q&A booklet.

Here, the Post-Grant Proceedings Group
at Wolf Greenfield keeps you up to date
on the latest decisions and best practices, and what they mean for you. Learn more about the group and its members.

This blog is intended to promote thought and debate on developing areas of the law. The opinions, commentary and characterizations of cases provided on this blog are not legal advice and do not represent the opinions of Wolf Greenfield or its clients.

© 2020 Wolf, Greenfield & Sacks, P.C. All Rights Reserved. This site contains Attorney Advertising. Prior results do not guarantee a similar outcome.